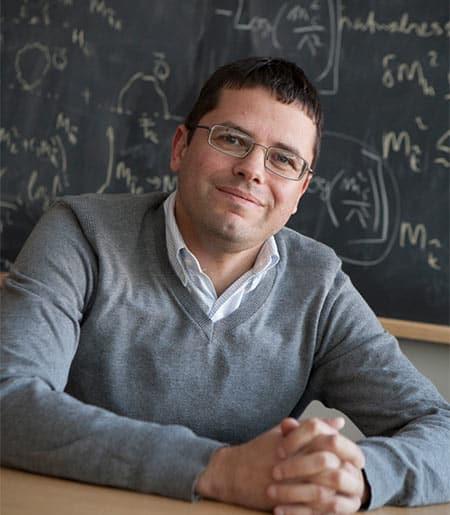 My research is mainly focused on theory and phenomenology of electroweak symmetry breaking (EWSB). While the fact that the symmetry is broken is universally accepted as one of the cornerstones of the standard model of particle physics, the mechanism responsible for this breaking is at present unknown. Several alternative mechanisms have been proposed by theorists. Each model predicts a rich variety of new physical phenomena such as new particles, interactions, and possibly even new compact dimensions of space. I am interested both in constructing new models of EWSB, and in devising strategies for testing them experimentally. The latter area is especially exciting since relevant experiments are currently under way at the Large Hadron Collider (LHC) in Geneva, Switzerland. Examples of my recent research in this direction include: studying predictions of natural EWSB models for the properties of the recently discovered Higgs boson; proposals of novel strategies to search for supersymmetry and other new physics at the LHC, including the use of machine learning techniques such as neural networks; and studies of the ability of current and future collider data to shed light on the dynamics of electroweak-breaking phase transition which occurred in the early Universe about a nanosecond after the Big Bang.

I am also interested in theoretical cosmology, especially topics on the interface of particle physics and cosmology such as theoretical models for dark energy, dark matter, and inflation. For example, many models of physics beyond the Standard Model predict new particles which could constitute all or most of the cosmological dark matter. Such particles can be detected by sensitive “direct detection” experiments, and may be produced and studied at high-energy colliders such as the LHC or in lower-energy experiments. Recently, my group has proposed a novel dark matter candidate, Elastically Decoupling Relic or ELDER, and studied its experimental signatures.

Doing research with my group requires good working knowledge of quantum field theory and the standard model of particle physics, as well as some understanding of basic experimental techniques used in high energy physics.