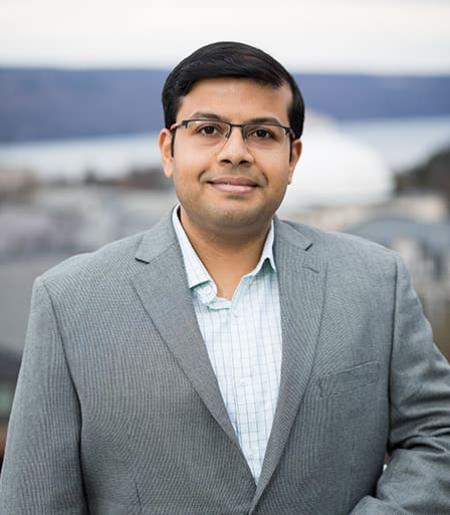 Our group works on a variety of problems in theoretical condensed matter Physics. The concept of quasiparticles, the long-lived excitations above the ground state of a many-body system, which remain particle-like even in the presence of strong electron-electron interactions, has been immensely successful in describing the phenomenology of electronic systems. However, recent decades have seen an increasing number of challenges to these ideas, following the discovery of phenomena such as the fractional quantum Hall effect, ‘strange’ metals and frustrated quantum magnetism. A central theme of our research is the Physics of such strongly correlated quantum systems, where the effects of interaction can lead to the emergence of dramatic new collective phenomena, not describable in terms of the standard quasiparticle-based framework. Many of these problems are inspired by our quest for understanding experiments on a variety of exotic materials, such as unconventional superconductors, quantum spin liquids and non-Fermi liquids,  from a fundamental microscopic point of view.

My research is focused primarily on the study of strongly correlated quantum matter, using techniques from quantum field theory and quantum information.

There are a plethora of materials, such as the cuprates, the pnictides, the ruthenates and so on, that display a strong departure from conventional Fermi liquid behavior over a broad range of temperatures. One of the most remarkable empirical facts related to transport across these microscopically distinct systems is their apparent universality of (“Planckian”) scattering rates. Given the ubiquitous nature of these observations, one of the fundamental questions that I am interested in is whether there exists a universal effective theory for a subset of these non-Fermi liquid metals?

Conventional topological (band) insulators have a gapped bulk and a symmetry protected metallic surface. I am interested in addressing the possibility of strong interactions leading to the emergence of new kinds of topological insulators with an electrically insulating bulk and emergent non-local quasiparticles. A series of paradoxical measurements in topological mixed-valence compounds, including the dramatic observation of bulk quantum oscillations as a function of an external magnetic field in an electrical insulator, suggest the possible existence of a neutral Fermi surface. Inspired by these experiments, we recently proposed a new phase of matter that has an emergent neutral fermionic excitation, dubbed the composite fermionic exciton. More broadly, I am interested in developing an alternative formulation for describing such emergent non-local excitations, that goes beyond standard “parton” based descriptions, where the canonical electron operator is expressed in terms of excitations that carry its spin and charge separately.