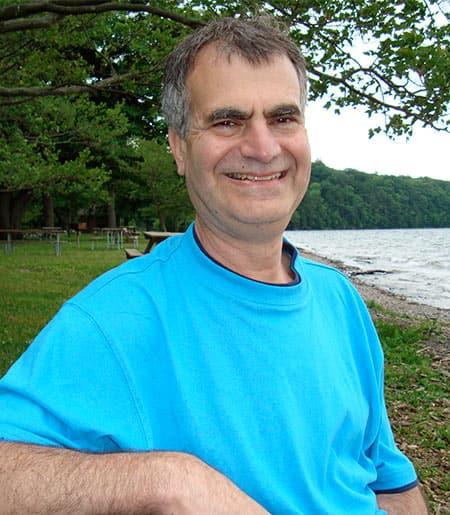 In electron storage rings, stochastic emission of synchrotron radiation photons heats up the electron beam. We propose to use recover the radiation emitted in the optical part of the spectrum to cool the beam. The light is generated in an undulator that is designed to radiate at the appropriate wavelength, (about 1 micron). The light is amplified and directed along the axis of a second, so-called, kicker  undulator. The electrons oscillate transversely in the kicker undulator, and the relative phase of electrons and the radiation fromt eh ‘pickup’ undulator is chosen to damp the transverse motion. The wavelength of the radiation defines the tolerance for the beam optics, and the experimental challenge. Stochastic cooling as a technique for reducing the emittance of a beam of anti-protons was developed at CERN in the early 1970s. It earned its inventor, Simon van der Meer, the 1984 Nobel Prize. Van der Meer's system operated at microwave frequencies. The theory of stochastic cooling indicates that the cooling rate scales linearly with frequency, corresponding to 4 order of magnitude faster cooling at optical as compared to microwave frequencies. Ours will be the first implementation and test of optical stochastic cooling. It will involve accelerator lattice design, undulators, lasers, optical amplifiers, nonlinear optics, instrumentation to measure properties of the electron beam, and dedicated operation of the Wilson accelerator complex and especially the storage ring CESR.

The round trip speed of light is measured to be isotropic with extraordinary precision. That is, we know that the average velocity of light traveling east then west is the same as it is traveling north and then south. The relative velocity of light traveling in opposite directions (east vs west) is more difficult to measure. Theories of quantum gravity suggest an inevitable anisotropy in the speed of light. We find that the Cornell Electron-Positron Storage Ring (CESR) operating at beam energy of 5GeV is an excellent laboratory for a precision measurement of the anisotropy. We measure the relative momentum of counter-rotating electrons and positrons and search for a diurnal signal. We expect to be able to set an improved limit on the directional of light speed with this experiment and its successors.

The phase space density (emittance) of bunches of ultra-relativistic electrons and positrons circulating in a storage ring (like the Cornell Electron/Positron Storage Ring, CESR) is determined by the equilibrium of excitations - due to stochastic emission of photons, intra-beam scattering, electron cloud effects, interactions with residual gas and ions, and wake fields – and damping by synchrotron radiation. At the Wilson Laboratory we accelerate electrons and create positrons in our linear accelerator, boost their energy to anywhere from 1.5 to 5.3 GeV in the 768 m circumference synchrotron and then transfer them (positrons clockwise and electrons counterclockwise) to the storage ring CESR, where they circulate for many hours. The storage ring is instrumented with detectors to measure beam position, beam size, and bunch length, as well as the cloud of electrons that evolves around a positron beam and the ions trapped by an electron beam.  CESR is the laboratory for the study of the physics that limits the particle density. We continue to develop instrumentation with better precision and higher bandwidth for monitoring beam properties. Our goal is to achieve the quantum limited emittance and to explore the particle dynamics in the ultra-low emittance regime.

The goal of the new muon g-2 experiment at Fermi-Lab. is to measure the anomalous magnetic moment of the muon with 0.14ppm accuracy, corresponding to a 4-fold improvement over the existing best measurement. Meanwhile, there is a 3σ discrepancy between the measurement and the standard model calculation of the anomaly. The value of the anomaly arises from loops (radiative corrections) from virtual leptons, hadrons, and gauge bosons. The existing discrepancy between theory and measurement suggests the possibility of loops with new particles beyond the standard model. The new measurement will be sensitive to particles at the TeV scale, beyond the range accessible at the LHC. At present the uncertainties in the calculated and measured values of g-2 are comparable. The better measurement will motivate theorists to a better calculation. The experiment is planned to begin taking data in 2016. The experiment will also improve the upper limit on the muon electric dipole moment by a factor of nearly 100. The Cornell group is building the injection kicker for the muon storage ring and waveform digitizers for the calorimeters that detect the decay electrons.. Members of the Cornell g-2 group along with myself and Professor Lawrence Gibbons are graduate students Robin Bjorkquist, David Sweigart and, Cameron Duncan, undergrads Daniel Seleznev and Xiaoning Wan, postdocs Antoine Chapelain and Kevin Labe, Senior Physicist Alexander Mikhailichenko. and engineer Nate Rider.

The Cornell Electron Storage Ring is the source of x-rays for CHESS, as well as for the CesrTA beam physics research program. The storage ring is undergoing a major upgrade to enhance the x-ray source with additional undulator beam lines, higher beam energy and reduced beam emittance. The new layout and magnetic lattice were conceived and designed by the accelerator physics group that includes research associates Jim Crittenden, Jim Shanks, Suntao Wang and Stephen Poprocki. The accelerators will be off for installation of new equipment beginning summer 2018 with commissioning planned for Fall 2018.