As a student at Cornell in the late 1930s, Cedric Jimerson ’40 M.D. ’43, started his days trekking downtown to the Cornell infirmary at 5:30 a.m., where he would deliver food to patients and help out in the kitchen. He’d then trudge back up Buffalo Street to attend classes and head back downtown again in the late afternoon for his second shift.

“I wanted to be a doctor for a long time, but I didn’t really have the money to do it,” said Jimerson, who turns 100 on Aug. 7. “So I worked my way through Cornell. Tuition was $400 then, and that seemed like a fortune.” Jimerson’s NY Regents scholarship helped.

Jimerson, who was also in the ROTC, was accepted into Cornell’s medical school in New York City after his third year. He finished that degree and a surgical internship before serving in World War II as a captain and battalion surgeon in the U.S. Army Medical Corps.

This month, Jimerson was honored with other veterans from his home state of Pennsylvania at a ceremony in Harrisburg, Pa. commemorating the 75th anniversary of D-Day. After his local delegate’s introduction, he was greeted with a standing ovation by the legislators.

As a high school student Jimerson learned about Cornell from Dr. Harry Briton, a Boy Scout camp doctor who was a physician at the Cornell infirmary. Briton encouraged him to apply. Jimerson’s older brother, Harry, Jr., also went to Cornell but died during his junior year of a congenital renal illness.

Jimerson remembers visiting campus and being impressed by the buildings housing the chemistry and physics departments – Baker Lab and Rockefeller Hall – which would become his majors.

“I had some trouble in my first year with math and was surprised when I got a D on my first exam,” he said with a laugh. “I was the salutatorian in high school, after all. But I studied more and I improved.”

One year, he paid $5 a week to live in a rooming house at 214 Dryden Ave. Coincidentally, his granddaughter, Lauren Jimerson, ’07 would live in the same house when she came to Cornell, but at a bit higher rent of $700 a month.

As an ROTC member, Jimerson knew he would serve in the military after graduation, so he prepared for the role. He rode the Cornell polo ponies in case he served in the cavalry, then pursued surgery in medical school. He quickly became a battalion surgeon in the 402nd anti-aircraft battalion, in the infantry and in the 940th field artillery battalion, responsible for the care of troops suffering everything from fractures to venereal disease.

Eventually, he was called to head overseas.

“I went on a troop ship, an old Liberty Ship, and the Atlantic Ocean was very wild,” he said. “We rocked and rolled and were taking roundabout turns all the way because of the U-boats and the Luftwaffe.”

Though he was well-prepared technically, Jimerson said nothing would have prepared him for what he saw when he landed in Liverpool in 1944.

“None of us was familiar with the tragedy we would see – the loss of life, the complete destruction of cities,” he said. “Europeans were being bombed every night.”

Jimerson spent a year and a half in Europe as captain and surgeon in the 663rd medical clearing company, including six months in a German combat zone, for which he won two bronze stars. He said he felt well trained for most of the work he did, but that doctors often had to improvise to treat some of the more complex cases. He and other surgeons, for example, developed a method using tubing and condoms to stabilize gunshot wound patients and prevent collapsed lungs.

After his years of military service, Jimerson was appointed chief of surgery at Community General Hospital in Reading, Pa. in 1950. From 1950 to the 1960’s there were no surgical specialists in Reading, so he worked long hours as a general surgeon and, with his wife, Julia, raised a family of three boys. Jimerson greatly expanded the surgical department at his hospital and served until his retirement in 1986.

Today, at The Heritage of Green Hills where he lives, there is an active veterans’ group and four other World War II veterans. Jimerson has written several books about his life’s experiences and has traveled back to Cornell many times, having one son and two granddaughters who are Cornell alums and one son who is a Cornell medical school alumnus. 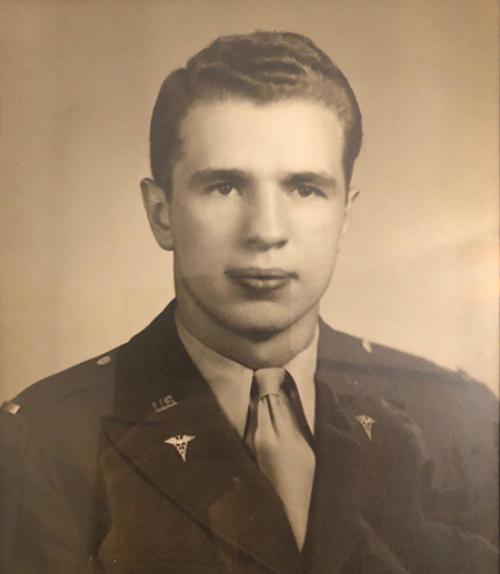